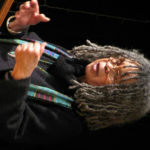 Why Is Sonia Sanchez Influential?

According to Wikipedia, Sonia Sanchez is an American poet, writer, and professor. She was a leading figure in the Black Arts Movement and has written over a dozen books of poetry, as well as short stories, critical essays, plays, and children's books. In the 1960s, Sanchez released poems in periodicals targeted towards African-American audiences, and published her debut collection, Homecoming, in 1969. In 1993, she received Pew Fellowship in the Arts, and in 2001 was awarded the Robert Frost Medal for her contributions to the canon of American poetry. She has been influential to other African-American poets, including Krista Franklin.

Other Resources About Sonia Sanchez

What Schools Are Affiliated With Sonia Sanchez?

Sonia Sanchez is affiliated with the following schools: