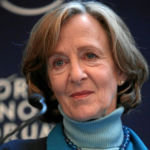 Why Is Susan Hockfield Influential?

According to Wikipedia, Susan Hockfield is an American neuroscientist who served as the sixteenth president of the Massachusetts Institute of Technology from December 2004 through June 2012. Hockfield succeeded Charles M. Vest and was succeeded by L. Rafael Reif, who had served in her administration as Provost. Hockfield was the first biologist and the first woman to serve as the Institute's president. Hockfield currently serves as a Professor of Neuroscience in MIT's Department of Brain and Cognitive Sciences, a Joint Professor of Work and Organization Studies in MIT’s Sloan School of Management, and a member of the Koch Institute for Integrative Cancer Research. She is also a director of Break Through Cancer, Cajal Neuroscience, Fidelity Non-Profit Management Foundation, Lasker Foundation, Mass General Brigham, Pfizer, Repertoire Immune Medicines, and the Whitehead Institute for Biomedical Research; a lifetime member of the MIT Corporation; and a board member of the Belfer Center at the Harvard Kennedy School of Government. Before returning to MIT following her presidency, Hockfield held the Marie Curie Visiting Professorship at Harvard University's John F. Kennedy School of Government.

Other Resources About Susan Hockfield

What Schools Are Affiliated With Susan Hockfield?

Susan Hockfield is affiliated with the following schools: