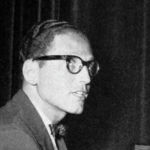 Why Is Tom Lehrer Influential?

According to Wikipedia, Thomas Andrew Lehrer is an American former musician, singer-songwriter, satirist, and mathematician, having lectured on mathematics and musical theater. He is best known for the pithy and humorous songs that he recorded in the 1950s and 1960s. His songs often parodied popular musical forms, though he usually created original melodies when doing so. A notable exception is "The Elements", in which he set the names of the chemical elements to the tune of the "Major-General's Song" from Gilbert and Sullivan's Pirates of Penzance.

Other Resources About Tom Lehrer

What Schools Are Affiliated With Tom Lehrer?

Tom Lehrer is affiliated with the following schools: