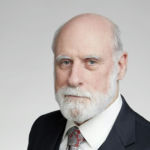 Why Is Vint Cerf Influential?

Vinton Grey Cerf is one of the founding fathers of the Internet. He received his degree in mathematics from Stanford University. After a two year stint as an engineer working on QUICKTRAN, an early computer language based on FORTRAN, Cerf received his masters and his Ph.D. in computer science at UCLA.

Cerf is a figure of foundational importance to the development of the Internet. At UCLA he worked on the TCP/IP protocol, where packets of information are sent through the nodes and hubs of computer networks like the Internet. He worked for the Defense Advanced Research Projects Agency (DARPA) where he was active in funding companies to develop the infrastructure and algorithms that comprise the Internet. At telecommunications company MCI, Cerf developed the world’s first commercial email system. But perhaps his most influential and lasting contribution was his early work on Internet protocols. Cerf wrote the Transmission Control Protocol (TCP) which made communication between computers on the Internet possible. His later work on email and other early applications only add to his fundamental, early work.

Cerf is now Google’s Vice President and Chief Internet Evangelist. In his stellar career, he has won a number of prestigious awards, including the National Medal of Technology, the Turing Award, and the Presidential Medal of Freedom. Hearing impaired, he has been active in providing digital access for people with disabilities.

According to Wikipedia, Vinton Gray Cerf is an American Internet pioneer and is recognized as one of "the fathers of the Internet", sharing this title with TCP/IP co-developer Bob Kahn. He has received honorary degrees and awards that include the National Medal of Technology, the Turing Award, the Presidential Medal of Freedom, the Marconi Prize and membership in the National Academy of Engineering.

Other Resources About Vint Cerf

What Schools Are Affiliated With Vint Cerf?

Vint Cerf is affiliated with the following schools: