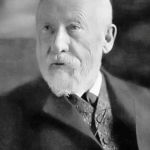 Why Is Wilhelm Dilthey Influential?

According to Wikipedia, Wilhelm Dilthey was a German historian, psychologist, sociologist, and hermeneutic philosopher, who held G. W. F. Hegel's Chair in Philosophy at the University of Berlin. As a polymathic philosopher, working in a modern research university, Dilthey's research interests revolved around questions of scientific methodology, historical evidence and history's status as a science. He could be considered an empiricist, in contrast to the idealism prevalent in Germany at the time, but his account of what constitutes the empirical and experiential differs from British empiricism and positivism in its central epistemological and ontological assumptions, which are drawn from German literary and philosophical traditions.

Other Resources About Wilhelm Dilthey

What Schools Are Affiliated With Wilhelm Dilthey?

Wilhelm Dilthey is affiliated with the following schools: