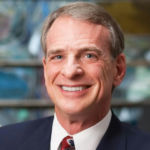 Why Is William Lane Craig Influential?

William Lane Craig was born in Peoria, Illinois, in 1949. He earned a B.A. from Wheaton College, and pursued graduate work at Trinity Evangelical Divinity School in the philosophy of religion. His earned his doctorate in 1977 at the University of Birmingham, England, with work on the cosmological argument for God’s existence under the supervision of John Hick. He pursued postdoctoral work under the direction of Wolfhart Pannenberg at the Ludwig-Maximillians-Universität München in Germany, where he earned a doctorate in theology in 1984.

Craig is currently research professor of philosophy at the Talbot School of Theology at Biola University and professor of philosophy at Houston Baptist University. He lectures widely on the philosophy of religion, apologetics, and metaphysics. Biola University created a permanent faculty position and endowed chair, the William Lane Craig Endowed Chair in Philosophy, in honor of Craig’s academic contributions in 2017. Craig often participates in debates and public dialogues on topics related to Christianity and theology.

Selected works from Craig include The Kalām Cosmological Argument, The Tensed Theory of Time: A Critical Examination, and God Over All: Divine Aseity and the Challenge of Platonism.

According to Wikipedia, William Lane Craig is an American analytic philosopher, Christian theologian, Christian apologist, and author. He is Professor of Philosophy at Houston Baptist University and Research Professor of Philosophy at Talbot School of Theology . Craig has updated and defended the Kalam cosmological argument for the existence of God. He has also published work where he argues in favor of the historical plausibility of the resurrection of Jesus. His study of divine aseity and Platonism culminated with his book God Over All. He is a Wesleyan theologian who upholds the view of Molinism and neo-Apollinarianism.

Other Resources About William Lane Craig

What Schools Are Affiliated With William Lane Craig?

William Lane Craig is affiliated with the following schools:

William Lane Craig has made the following academic contributions: