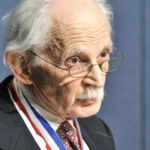 Why Is Allen J. Bard Influential?

Allen J. Bard is a chemist and the Hackerman-Welch Regents Chair Professor and director of the Center for Electrochemistry at the University of Texas at Austin. He studied at the City College of New York before earning a Master’s degree and Ph.D. from Harvard University.

Bard has spent his entire career at the University of Texas at Austin but has served appointments at Cornell University and as the Robert Burns Woodward visiting professor for Harvard University. Known as the “father of modern electrochemistry”, Bard has made substantial contributions to the field. He developed the scanning electrochemical microscope, co-discovered electrochemiluminescence, and made advancements in our understanding of the photoelectrochemistry of semiconductor electrodes.

With more than 1000 research works to his credit, Bard has written three books about electrochemistry. His textbook, Electrochemical Methods – Fundamentals and Applications is known as the standard text on the topic. So much so in fact that students refer to the text as “the Bard.”

At his Center for Electrochemistry, he worked with his colleagues to create light using electrochemistry. This work has been instrumental in the development of new testing and treatment options.

According to Wikipedia, Allen Joseph Bard is an American chemist. He is the Hackerman-Welch Regents Chair Professor and director of the Center for Electrochemistry at the University of Texas at Austin. Bard is considered a "father of modern electrochemistry" for his innovative work developing the scanning electrochemical microscope, his co-discovery of electrochemiluminescence, his key contributions to photoelectrochemistry of semiconductor electrodes, and co-authoring a seminal textbook.

Other Resources About Allen J. Bard

What Schools Are Affiliated With Allen J. Bard?

Allen J. Bard is affiliated with the following schools: