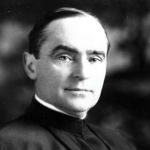 Why Is Alphonsus J. Donlon Influential?

According to Wikipedia, Alphonsus J. Donlon was an American Catholic priest and Jesuit who spent his career in priestly ministry and academia, including as president of Georgetown University from 1912 to 1918. Born in Albany, New York, he garnered a reputation as a good student and an exceptional collegiate athlete. As a professor, he went on to lead Georgetown University's sports program, which enjoyed great success. As a result, he became known as the "father of Georgetown athletics." He served as a professor of various sciences at Georgetown University and at Woodstock College, and as president of the former, he oversaw the removal of Georgetown Preparatory School from the university to a separate campus, and proposed the creation of the School of Foreign Service. For a significant portion of his career, he also served as a chaplain to Georgetown Visitation Monastery. In his later years, he engaged in pastoral work at St. Francis Xavier Church in New York City and taught at Fordham University.

Other Resources About Alphonsus J. Donlon

What Schools Are Affiliated With Alphonsus J. Donlon?

Alphonsus J. Donlon is affiliated with the following schools: