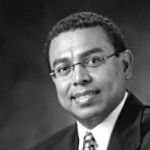 Why Is Arlie Petters Influential?

According to Wikipedia, Arlie Oswald Petters, MBE is a Belizean-American mathematical physicist, who is the Benjamin Powell Professor of Mathematics and a Professor of Physics and Economics at Duke University. Petters will become the Provost at New York University Abu Dhabi effective September 1, 2020. Petters is a founder of mathematical astronomy, focusing on problems connected to the interplay of gravity and light and employing tools from astrophysics, cosmology, general relativity, high energy physics, differential geometry, singularities, and probability theory. His monograph "Singularity Theory and Gravitational Lensing" developed a mathematical theory of gravitational lensing. Petters was also the dean of academic affairs for Trinity College of Arts and Sciences and associate vice provost for undergraduate education at Duke University .

Other Resources About Arlie Petters

What Schools Are Affiliated With Arlie Petters?

Arlie Petters is affiliated with the following schools: