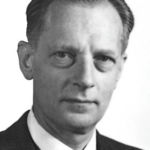 Why Is Carl Ferdinand Cori Influential?

According to Wikipedia, Carl Ferdinand Cori, ForMemRS was a Czech-American biochemist and pharmacologist born in Prague who, together with his wife Gerty Cori and Argentine physiologist Bernardo Houssay, received a Nobel Prize in 1947 for their discovery of how glycogen – a derivative of glucose – is broken down and resynthesized in the body, for use as a store and source of energy. In 2004, both Coris were designated a National Historic Chemical Landmark in recognition of their work that elucidated carbohydrate metabolism.

Other Resources About Carl Ferdinand Cori

What Schools Are Affiliated With Carl Ferdinand Cori?

Carl Ferdinand Cori is affiliated with the following schools: