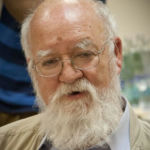 Why Is Daniel Dennett Influential?

Currently appointed as the Austin B. Fletcher Professor of Philosophy at Tufts University (and co-director of the Center for Cognitive Studies) Daniel Dennett is a philosopher concerned with questions of the mind and cognitive science, and is colloquially known as one of the “Four Horsemen of New Atheism.” As an undergraduate, Dennett studied at Wesleyan University and Harvard University before earning his PhD in philosophy at Oxford University in 1965.

Whether discussing consciousness, perception, or free will, the philosophy of mind is central to Dennett’s work. In particular, Dennett is known for calling for empirical explanations for processes of the mind, proposing models of thought and perception that are similar to mechanical calculation. Thought, perception, and all other mental activity occur with parallel processes in the brain, like a computer calculating input data. Dennett’s philosophy extends to debates about evolution, morality, and religion as well, arguing for evolution as a kind of algorithmic process, which produces outcomes including morality; religion too can be seen as resulting from a kind of naturalistic process.

Among numerous awards and honors, Dennett has received two Guggenheim fellowships and a Fulbright fellowship.

Other Resources About Daniel Dennett

What Schools Are Affiliated With Daniel Dennett?

Daniel Dennett is affiliated with the following schools: