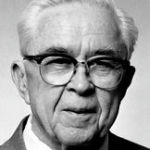 Why Is Edward B. Lewis Influential?

According to Wikipedia, Edward Butts Lewis was an American geneticist, a corecipient of the 1995 Nobel Prize in Physiology or Medicine. He helped to found the field of evolutionary developmental biology. Early life Lewis was born in Wilkes-Barre, Pennsylvania, the second son of Laura Mary Lewis and Edward Butts Lewis, a watchmaker-jeweler. His full name was supposed to be Edward Butts Lewis Jr., but his birth certificate was incorrectly filled out with "B." as his middle name.

Other Resources About Edward B. Lewis

What Schools Are Affiliated With Edward B. Lewis?

Edward B. Lewis is affiliated with the following schools: