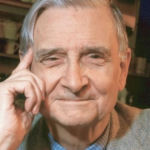 Why Is Edward O. Wilson Influential?

Areas of Specialization: Myrmecology, Biodiversity, Sociobiology
Edward O. Wilson is the world’s leading expert on ants, a specialty known as myrmecology, but that’s not all. He is also considered the father of biodiversity and the father of sociobiology. He is the Pellegrino University Research Professor Emeritus of Entomology at the Department of Organismic and Evolutionary Biology at Harvard University and a lecturer at Duke University. He earned his BS and MS in biology from the University of Alabama. He was named to the Harvard Society of Fellows, which enabled him to travel around the world studying ant species from Australia to Cuba. He graduated from Harvard University with his PhD.

His interest in entomology began at an early age. He suffered a loss of vision in his right eye, forcing him to look differently at the world. He began to focus on the tiniest creatures, as those were the ones he could see best. At 18, he was collecting flies to study, but a lack of insect pins caused by the war made him switch to ants.

His book, On Human Nature, won the Pulitzer Prize in 1979. In 1991, he won yet another Pulitzer Prize, for The Ants, which he wrote with Bert Hölldobler. He is the founder of the E.O. Wilson Biodiversity Foundation.

According to Wikipedia, Edward Osborne Wilson was an American biologist, naturalist, and writer. His specialty was myrmecology, the study of ants, on which he was called the world's leading expert, and he was nicknamed Ant Man.

Other Resources About Edward O. Wilson

What Schools Are Affiliated With Edward O. Wilson?

Edward O. Wilson is affiliated with the following schools:

Edward O. Wilson has made the following academic contributions: