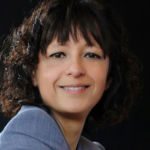 Why Is Emmanuelle Charpentier Influential?

Areas of Specialization: Microbiology, Genetics
Emmanuelle Charpentier is the Founding and Acting Director of the Max Planck Unit for the Science of Pathogens and an Honorary Professor at Humboldt University of Berlin. She completed her undergraduate studies at the Pierre and Marie Curie University, which is now known as the Faculty of Science at Sorbonne University. She went on to earn a research doctorate from the Institut Pasteur.

Charpentier is well known for her collaboration with Jennifer Doudna on decoding the molecular mechanisms of the CRISPR/Cas9 bacterial immune system. Her work on CRISPR has enabled scientists to edit the genome using Cas9.

For her work on CRISPR, she has received the BBVA Foundation Frontiers of Knowledge Award, the Gruber Foundation International Prize in Genetics, the Leibniz Prize, the Kavli Prize and the Breakthrough Prize in Life Sciences, the Novozymes Prize, the Bijvoet Medal of the Bijvoet Center for Biomolecular Research at Utrecht University, and most recently, the Scheele Award of the Swedish Pharmaceutical Society.

According to Wikipedia, Emmanuelle Marie Charpentier is a French professor and researcher in microbiology, genetics, and biochemistry. Since 2015, she has been a Director at the Max Planck Institute for Infection Biology in Berlin. In 2018, she founded an independent research institute, the Max Planck Unit for the Science of Pathogens. In 2020, Charpentier and American biochemist Jennifer Doudna of the University of California, Berkeley, were awarded the Nobel Prize in Chemistry "for the development of a method for genome editing" . This was the first science Nobel ever won by two women alone.

Other Resources About Emmanuelle Charpentier

What Schools Are Affiliated With Emmanuelle Charpentier?

Emmanuelle Charpentier is affiliated with the following schools: