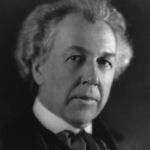 Why Is Frank Lloyd Wright Influential?

According to Wikipedia, Frank Lloyd Wright was an American architect, designer, writer, and educator. He designed more than 1,000 structures over a creative period of 70 years. Wright believed in designing in harmony with humanity and the environment, a philosophy he called organic architecture. This philosophy was exemplified in Fallingwater , which has been called "the best all-time work of American architecture". Wright played a key role in the architectural movements of the twentieth century, influencing architects worldwide through his works and hundreds of apprentices in his Taliesin Fellowship.

Other Resources About Frank Lloyd Wright

What Schools Are Affiliated With Frank Lloyd Wright?

Frank Lloyd Wright is affiliated with the following schools: