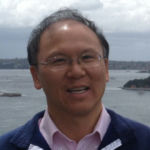 Why Is Guozhen Lu Influential?

According to Wikipedia, Guozhen Lu is a professor of mathematics at the University of Connecticut. He is known for his contributions to harmonic analysis, geometric analysis, and partial differential equations.Education and career Lu graduated from Zhejiang University in Hangzhou, China in 1983 and earned his Ph.D. from Rutgers University in 1991. He was a Bateman Research Instructor in the Department of Mathematics at the California Institute of Technology from 1991 to 1993, and an assistant professor in the Department of Mathematics and Statistics at Wright State University from 1993 to 1997 and an associate professor of the same department from 1997 to 2000 before he moved to Wayne State University. He became a professor of mathematics at Wayne State University in 2002. He joined the University of Connecticut in 2016 as a professor. Lu has co-organized many international conferences, including the series of the East Asian Conference in Harmonic Analysis and Applications, which is held annually, rotating between China, Japan, and Korea.

Other Resources About Guozhen Lu

What Schools Are Affiliated With Guozhen Lu?

Guozhen Lu is affiliated with the following schools: