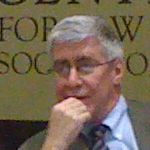 Why Is Jeremy Waldron Influential?

Areas of Specialization: Legal Philosophy
Jeremy Waldron is a University Professor of the School of Law at New York University and an adjunct professor for Victoria University of Wellington. He earned a B.A. and an LL.B. from the University of Otago in New Zealand. He went on to earn a D.Phil. at Lincoln College, Oxford.

Waldron’s extensive catalog of writings explore the rule of law, constitutionalism, homelessness, torture, and many other topics. His most recent book, One Another’s Equals: The Basis of Human Equality, was published in 2017. He has critically examined the notion of human dignity, and the impacts of a leveling of social classes by way of elevation of all to royalty. In 2012, he wrote about human dignity in Dignity, Rank, and Rights.

He has also written about his research into the philosophies of John Locke and his approach to law and politics and is a fierce critic of the idea of judicial review, which would give federal judges the power of oversight over the legislative and executive branches. His view is that in so doing, power is granted to the judicial branch to overturn the will of the American people. Waldron is a member of the American Academy of Arts and Sciences and the British Academy.

According to Wikipedia, Jeremy Waldron is a New Zealand professor of law and philosophy. He holds a University Professorship at the New York University School of Law, is affiliated with the New York University Department of Philosophy, and was formerly the Chichele Professor of Social and Political Theory at All Souls College, Oxford University. Waldron also holds an adjunct professorship at Victoria University of Wellington. Waldron is regarded as one of the world's leading legal and political philosophers.

Other Resources About Jeremy Waldron

What Schools Are Affiliated With Jeremy Waldron?

Jeremy Waldron is affiliated with the following schools: