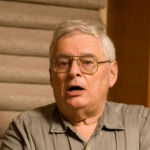 Why Is Jerry Fodor Influential?

According to Wikipedia, Jerry Alan Fodor was an American philosopher and the author of many crucial works in the fields of philosophy of mind and cognitive science. His writings in these fields laid the groundwork for the modularity of mind and the language of thought hypotheses, and he is recognized as having had "an enormous influence on virtually every portion of the philosophy of mind literature since 1960." Until his death in 2017 he held the position of State of New Jersey Professor of Philosophy, Emeritus, at Rutgers University.

Other Resources About Jerry Fodor

What Schools Are Affiliated With Jerry Fodor?

Jerry Fodor is affiliated with the following schools: