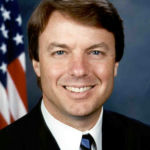 Why Is John Edwards Influential?

According to Wikipedia, Johnny Reid Edwards is an American lawyer and former politician who served as a U.S. senator from North Carolina. He was the Democratic nominee for vice president in 2004 alongside John Kerry, losing to incumbents George W. Bush and Dick Cheney. He also was a candidate for the Democratic presidential nomination in 2004 and 2008.

Other Resources About John Edwards

What Schools Are Affiliated With John Edwards?

John Edwards is affiliated with the following schools:

What Are John Edwards's Academic Contributions?

John Edwards has made the following academic contributions: