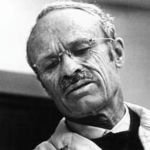 Why Is John Paul Scott Influential?

According to Wikipedia, John Paul Scott was an American behavior geneticist and comparative psychologist known for his research into the development of social behavior , which he pursued through studies in animal models including the dog. Scott & his collaborator John L. Fuller are memorialised in the Fuller-Scott prize, offered annually by the Behavior Genetics Association.

Other Resources About John Paul Scott

What Schools Are Affiliated With John Paul Scott ?

John Paul Scott is affiliated with the following schools: