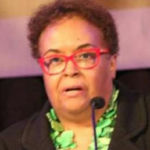 Why Is Joyce Ladner Influential?

According to Wikipedia, Joyce Ann Ladner is an American civil rights activist, author, civil servant, and sociologist. Early life and education Ladner was born in Battles, Wayne County, Mississippi, on October 12, 1943, and grew up in nearby Hattiesburg. She was raised with four brothers and four sisters. Ladner began school at the age of three and graduated high school in 1960 with her older sister, Dorie Ladner. She went to Tougaloo College in Tougaloo, Mississippi, where she earned her B.A. in sociology in 1964, and then to Washington University in St. Louis, where she earned her Ph.D. in 1968. During college, Ladner and her sister Dorie organized civil rights protests alongside Medgar Evers and other students from the Student Nonviolent Coordinating Committee. She and her sister were arrested and jailed for their activism. She told PBS of her activism in Mississippi:

Other Resources About Joyce Ladner

What Schools Are Affiliated With Joyce Ladner?

Joyce Ladner is affiliated with the following schools: