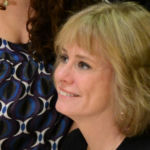 Why Is Kathy Reichs Influential?

According to Wikipedia, Dr. Kathleen Joan Toelle Reichs is an American crime writer, forensic anthropologist and academic. She is an adjunct professor of anthropology at the University of North Carolina at Charlotte; she is on indefinite leave. She is also affiliated with the Laboratoire des Sciences Judiciaires et de Médecine Légale for the province of Quebec. She is one of 100 anthropologists certified by the American Board of Forensic Anthropology and is on the board of directors of the American Academy of Forensic Sciences. Her schedule also involves a number of speaking engagements around the world. Reichs was a producer for the TV series Bones, which is loosely based on her novels, which in turn, are inspired by her life. She has two daughters, Kerry and Courtney, and one son, Brendan.

Other Resources About Kathy Reichs

What Schools Are Affiliated With Kathy Reichs?

Kathy Reichs is affiliated with the following schools:

What Are Kathy Reichs's Academic Contributions?

Kathy Reichs has made the following academic contributions: