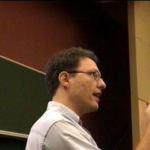 Why Is Luciano Floridi Influential?

Though trained as a philosopher and logician, in his professional life Floridi has turned to issues in computer ethics and Information and Communications Technology (ICT), founding the study of information as knowledge, known as the philosophy of information. His work seeks to provide a basis for understanding the importance of information technology, which is now pervasive in our everyday lives. He has been at the forefront of discussions about the legal and ethical issues involving information systems and computers.

Floridi is a prolific writer, and among his many books is his latest, The Logic of Information: A Theory of Philosophy as Conceptual Design, an exploration of the role of computational information in human knowledge. For his ongoing and central role in explaining the role of computation in our lives, Floridi is widely regarded as an influential voice in our attempts to understand the information systems which are of central importance to modern society.

According to Wikipedia, Luciano Floridi is an Italian philosopher who is currently Professor of Philosophy and Ethics of Information and Director of the Digital Ethics Lab at the University of Oxford, Oxford Internet Institute, Professorial Fellow of Exeter College, Oxford, Senior Member of the Faculty of Philosophy, Research Associate and Fellow in Information Policy at the Department of Computer Science, University of Oxford, and Distinguished Research Fellow of the Oxford Uehiro Centre for Practical Ethics. He is also Adjunct Professor , Department of Economics, American University, Washington D.C. He is Turing Fellow of the Alan Turing Institute, where he was chair of the Data Ethics Group .

Other Resources About Luciano Floridi

What Schools Are Affiliated With Luciano Floridi?

Luciano Floridi is affiliated with the following schools: