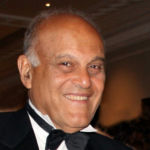 Why Is Magdi Yacoub Influential?

According to Wikipedia, Sir Magdi Habib Yacoub , is an Coptic Egyptian-British retired professor of cardiothoracic surgery at Imperial College London, best known for his early work in repairing heart valves with surgeon Donald Ross, adapting the Ross procedure, where the diseased aortic valve is replaced with the person's own pulmonary valve, devising the arterial switch operation in transposition of the great arteries, and establishing the heart transplantation centre at Harefield Hospital in 1980 with a heart transplant for Derrick Morris, who at the time of his death was Europe's longest-surviving heart transplant recipient. Yacoub subsequently performed the UK's first combined heart and lung transplant in 1983.

Other Resources About Magdi Yacoub

What Schools Are Affiliated With Magdi Yacoub?

Magdi Yacoub is affiliated with the following schools: