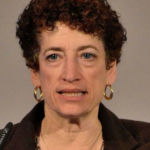 Why Is Naomi Oreskes Influential?

Areas of Specialization: History of Environmental Sciences, Science Policy, Philosophy of Science
Naomi Oreskes is a Professor of the History of Science, and an Affiliated Professor of Earth and Planetary Sciences at Harvard University. She earned a B.S. in mining geology from the Royal School of Mines of the Imperial College London. She went on to earn a Ph.D in geological research and history of science from Stanford University. Her body of work has encompassed geology, scientific methods, climate change, plate tectonics and the history and philosophy of science.

In 2004, she wrote an essay about evolving views on climate change, called Beyond the Ivory Tower: The Scientific Consensus on Climate Change, which has been cited by Al Gore. She also co wrote a book about the climate debate, called Merchants of Doubt: How a Handful of Scientists Obscured the Truth on Issues from Tobacco Smoke to Global Warming, which surveyed views regarding climate change from a history of science viewpoint, and drawing parallels between climate change and other controversial scientific theories such as acid rain.

She has also written other notable works, including The Rejection of Continental Drift: Theory and Method in American Earth Science and most recently, Why Trust Science, which was published in 2019. Her recent work explores the doubt-creation machine driving propaganda about climate change.

According to Wikipedia, Naomi Oreskes is an American historian of science. She became Professor of the History of Science and Affiliated Professor of Earth and Planetary Sciences at Harvard University in 2013, after 15 years as Professor of History and Science Studies at the University of California, San Diego. She has worked on studies of geophysics, environmental issues such as global warming, and the history of science. In 2010, Oreskes co-authored Merchants of Doubt, which identified some parallels between the climate change debate and earlier public controversies, notably the tobacco industry's campaign to obscure the link between smoking and serious disease.

Other Resources About Naomi Oreskes

What Schools Are Affiliated With Naomi Oreskes?

Naomi Oreskes is affiliated with the following schools:

What Are Naomi Oreskes's Academic Contributions?

Naomi Oreskes has made the following academic contributions: