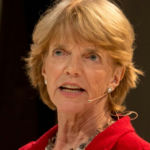 Why Is Patricia Churchland Influential?

Patricia Churchland’s research has been an interdisciplinary effort in both philosophy proper and the sciences, particularly neuroscience and neurobiology. She is known for a philosophical position allied to scientific research known as “eliminative materialism,” where “folk” concepts like consciousness, free will, and other aspects of what we think of as the mind will eventually be eliminate in favor of purely scientific accounts of the brain. Thus she views philosophy itself as a discipline that is changing (or should change)—a kind of “proto science” at its best, where questions are raised in terms of our knowledge of the brain rather than historical conundrums.

According to Wikipedia, Patricia Smith Churchland is a Canadian-American analytic philosopher noted for her contributions to neurophilosophy and the philosophy of mind. She is UC President's Professor of Philosophy Emerita at the University of California, San Diego , where she has taught since 1984. She has also held an adjunct professorship at the Salk Institute for Biological Studies since 1989. She is a member of the Board of Trustees Moscow Center for Consciousness Studies of Philosophy Department, Moscow State University. In 2015, she was elected a Fellow of the American Academy of Arts & Sciences. Educated at the University of British Columbia, the University of Pittsburgh, and Somerville College, Oxford, she taught philosophy at the University of Manitoba from 1969 to 1984 and is married to the philosopher Paul Churchland. Larissa MacFarquhar, writing for The New Yorker, observed of the philosophical couple that: "Their work is so similar that they are sometimes discussed, in journals and books, as one person."

Other Resources About Patricia Churchland

What Schools Are Affiliated With Patricia Churchland?

Patricia Churchland is affiliated with the following schools: