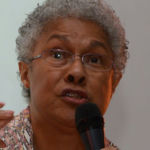 Why Is Patricia Hill Collins Influential?

American sociologist Patrician Hill Collins currently holds the title of University Professor of Sociology at the University of Maryland, College Park. She previously was a professor of the University of Cincinnati (where she was also head of the Department of African-American Studies). Collins also holds the distinction of being the 100th president of the American Sociological Association, the first African-American woman to do so. Collins completed her BA in sociology at Brandeis University in 1965, her MA in social science education at Harvard in 1970, and her PhD at Brandeis in 1984.

Collins is known for her work in the intersection of factors such as race, class, gender, sexuality, ethnicity, and national origin affect our perceptions of selves and others, as well as opportunities and barriers, and approach better known as intersectionality. In particular, Collins has placed a great deal of focus on how these various factors affect the status and lives of Black people in America. Though Collins did not coin the term “intersectionality” (that can be traced to Kimberlé Crenshaw, one of our most influential figures in law), her work has done a great deal to advance the idea as a critical tool, and explore how it can be implemented to better understand social issues and inequity.

For her work, Collins has received numerous awards and honors, including the Jessie Bernard Award of the ASA, the Distinguished Publication Award from the ASA, and the C. Wright Mills Award of the Society for the Study of Social Problems, as well as a handful of honorary doctorates.

According to Wikipedia, Patricia Hill Collins is an American academic specializing in race, class, and gender. She is a Distinguished University Professor of Sociology Emerita at the University of Maryland, College Park. She is also the former head of the Department of African-American Studies at the University of Cincinnati, and a past President of the American Sociological Association . Collins was the 100th president of the ASA and the first African-American woman to hold this position.

Other Resources About Patricia Hill Collins

What Schools Are Affiliated With Patricia Hill Collins?

Patricia Hill Collins is affiliated with the following schools:

Patricia Hill Collins has made the following academic contributions: