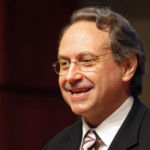 Why Is Rodney Brooks Influential?

According to Wikipedia, Rodney Allen Brooks is an Australian roboticist, Fellow of the Australian Academy of Science, author, and robotics entrepreneur, most known for popularizing the actionist approach to robotics. He was a Panasonic Professor of Robotics at the Massachusetts Institute of Technology and former director of the MIT Computer Science and Artificial Intelligence Laboratory. He is a founder and former Chief Technical Officer of iRobot and co-Founder, Chairman and Chief Technical Officer of Rethink Robotics and currently is the co-founder and Chief Technical Officer of Robust.AI . Outside the scientific community Brooks is also known for his appearance in a film featuring him and his work, .

Other Resources About Rodney Brooks

What Schools Are Affiliated With Rodney Brooks?

Rodney Brooks is affiliated with the following schools: