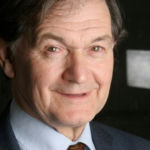 Why Is Roger Penrose Influential?

Sir Roger Penrose was born in Colchester, England in 1931. He is best known for his significant contributions to the mathematical physics of general relativity and cosmology. Penrose attended University College London where he earned his bachelor’s in mathematics. He received a PhD studying algebraic geometry at St John’s College, Cambridge in 1958. In his free time at Cambridge, he attended a few lectures led by Hermann Bondi and Paul Dirac, which lent some of his curiosity in the direction of physics. Penrose went on to become an innovator in the field of mathematical physics, and is now widely regarded as among the greatest living mathematical physicists.

In public life, he speaks frequently on topics of philosophy, addressing questions such as, why can the universe be explained coherently by mathematics? Famously, he has also written extensively on theories of the nature of consciousness, a topic typically broached in the discipline of academic philosophy (and related fields, such as cognitive science). In his 1989 book The Emperor’s New Mind, Penrose argued that consciousness arises from quantum effects in the brain, a view that both fascinated and drew criticism from other theorists about the mind. His follow-up book Shadows of the Mind in 1994 further explored his ideas about consciousness.

Roger Penrose is the recipient of numerous honors and awards for his distinguished career in mathematical physics. He was elected a Fellow of the Royal Society (FRS) in 1972. In 1988 he won the Wolf Prize for Physics, sharing the award with the late Stephen Hawking“>Stephen Hawking for work on black holes. In 1989 he was awarded the Dirac Medal and Prize of the British Institute of Physics, and in 1990 Penrose was awarded the Albert Einstein Medal. In 2000 he was appointed to the Order of Merit by the British Government.

According to Wikipedia, Sir Roger Penrose is a British mathematician, mathematical physicist, philosopher of science and Nobel Laureate in Physics. He is Emeritus Rouse Ball Professor of Mathematics at the University of Oxford, an emeritus fellow of Wadham College, Oxford, and an honorary fellow of St John's College, Cambridge, and University College London.

Other Resources About Roger Penrose

What Schools Are Affiliated With Roger Penrose?

Roger Penrose is affiliated with the following schools:

What Are Roger Penrose's Academic Contributions?

Roger Penrose has made the following academic contributions: