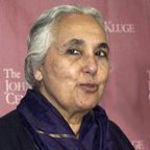 Why Is Romila Thapar Influential?

Her work has focused on increasing understanding of Indian history. She has written several major works on the topic, including Aśoka and the Decline of the Mauryas, Ancient Indian Social History: Some Interpretations, Recent Perspectives of Early Indian History (for which she was editor), A History of India Volume One, and The Penguin History of Early India: From the Origins to AD 1300.

She has also provided leadership through her work as the General President of the Indian History Congress and as the US Library of Congress’ Kluge Chair in Countries and Cultures of the South. Thapar has taught at the University of Pennsylvania, Cornell University and the College de France, and is an honorary fellow of St. Antony’s College and Lady Margaret Hall at Oxford and the School of Oriental and African Studies at the University of London.

She has twice rejected the Padma Bhushan award offered by the Indian government, on the grounds that she wishes not to be recognized with awards from non-academic institutions.

According to Wikipedia, Romila Thapar is an Indian historian. Her principal area of study is ancient India, a field in which she is pre-eminent. Thapar is a Professor of Ancient History, Emerita, at the Jawaharlal Nehru University in New Delhi.

Other Resources About Romila Thapar

What Schools Are Affiliated With Romila Thapar?

Romila Thapar is affiliated with the following schools:

What Are Romila Thapar's Academic Contributions?

Romila Thapar has made the following academic contributions: