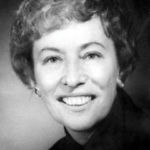 Why Is Ruth Sager Influential?

According to Wikipedia, Ruth Sager was an American geneticist. Sager enjoyed two scientific careers. Her first was in the 1950s and 1960s when she pioneered the field of cytoplasmic genetics by discovering transmission of genetic traits through chloroplast DNA, the first known example of genetics not involving the cell nucleus. The academic community did not acknowledge the significance of her contribution until after the second wave of feminism in the 1970s. Her second career began in the early 1970s and was in cancer genetics; she proposed and investigated the roles of tumor suppressor genes.

Other Resources About Ruth Sager

What Schools Are Affiliated With Ruth Sager?

Ruth Sager is affiliated with the following schools: