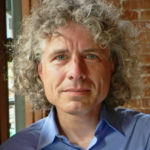 Why Is Steven Pinker Influential?

Cognitive scientist, linguist, and author, Steven Pinker currently holds the title of Johnstone Family Professor of Psychology at Harvard University. Previously, Pinker taught at Stanford University and the Massachusetts Institute of Technology. Pinker earned his bachelor’s in psychology from McGill University in 1976, and his Ph.D. in experimental psychology in 1979 at Harvard.

Pinker is recognized for his interdisciplinary work, combining psychology, cognitive science, and linguistics, and is a vocal proponent of evolutionary psychology and the computational theory of mind. Though he has several decades of research and academic work to his name, Pinker is best recognized as an author of popular science books, in which he expounds on ideas from linguistics and evolutionary psychology in a way accessible to a mainstream audience. In particular, Pinker often builds on the ideas of Noam Chomsky, arguing that language is a unique and innate faculty of the human mind, and that (his own stance) it emerges from evolution and natural selection. Pinker’s views have not been received without controversy.

For his work, Pinker has been recognized as a highly influential voice in psychology, linguistics, and popular science. He has received such awards and honors as being named one of the most influential people in the world by Time magazine, an Early Career Award and a Boyd Candless Award from the American Psychological Association, the Troland Research Award from the National Academy of Sciences, and has twice been a Pulitzer Prize finalist. He is also the first member of the Luxuriant Flowing Hair Club for Scientists (no, really).

Popular books by Pinker include The Language Instinct: How the Mind Creates Language, How the Mind Works, The Stuff of Thought: Language as a Window into Human Nature, and most recently, Enlightenment Now: The Case for Reason, Science, Humanism, and Progress.

According to Wikipedia, Steven Arthur Pinker is a Canadian-American cognitive psychologist, psycholinguist, popular science author and public intellectual. He is an advocate of evolutionary psychology and the computational theory of mind.

Other Resources About Steven Pinker

What Schools Are Affiliated With Steven Pinker?

Steven Pinker is affiliated with the following schools:

What Are Steven Pinker's Academic Contributions?

Steven Pinker has made the following academic contributions: