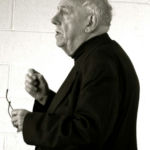 Why Is Alasdair MacIntyre Influential?

MacIntyre is widely considered one of the world’s top philosophers in ethics and political philosophy. His book, After Virtue, is a classic exposition of a virtue theory of ethics, and is regarded as one of the most influential books in philosophy written in the modern era. MacIntyre argues that while there is no objective moral standard that holds in any era, a historical analysis of morality can permit fruitful moral discussion, avoiding the specter of nihilism that 19th century thinkers like Nietzsche struggled with. MacIntyre believes that a purpose-based (teleological) view of morality represents at least a framework within which cultures can effectively approach moral issues.

According to Wikipedia, Alasdair Chalmers MacIntyre is a Scottish-American philosopher who has contributed to moral and political philosophy as well as history of philosophy and theology. MacIntyre's After Virtue is one of the most important works of Anglophone moral and political philosophy in the 20th century. He is senior research fellow at the Centre for Contemporary Aristotelian Studies in Ethics and Politics at London Metropolitan University, Emeritus Professor of Philosophy at the University of Notre Dame, and Permanent Senior Distinguished Research Fellow at the Notre Dame Center for Ethics and Culture. During his lengthy academic career, he also taught at Brandeis University, Duke University, Vanderbilt University, and Boston University.

Other Resources About Alasdair MacIntyre

What Schools Are Affiliated With Alasdair MacIntyre?

Alasdair MacIntyre is affiliated with the following schools:

What Are Alasdair MacIntyre's Academic Contributions?

Alasdair MacIntyre has made the following academic contributions: