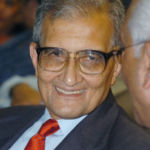 Why Is Amartya Sen Influential?

Amartya Sen is the Thomas W. Lamont University Professor and Professor of Economics and Philosophy at Harvard University. He earned a B.A. in economics from the University of Calcutta and a B.A., M.A., and Ph.D from Trinity College in Cambridge.

An expert in the study of welfare economics, Sen has an impressive bibliography showcasing his research and work. Having survived the Bengal famine of 1943 as a child, his interest in economics was piqued. In his work, Poverty and Famines: An Essay on Entitlement and Deprivation, he concluded that the cause of famine is not always just lack of food, it is just as often a breakdown in the distribution of available resources. In the case of the Bengal famine, he found that the cause of those three million deaths was not lack of food, but a time of economic surplus in urban areas that caused an increase in prices that workers could not afford.

He has also done important work in development economics, even working with the United Nations Development Program to create their Human Development Report. His most substantial contribution to economics has been his idea of “capability”. In Sen’s view, the rights a citizen has is far less important than what they have been empowered to do – their capability.

According to Wikipedia, Amartya Kumar Sen is an Indian economist and philosopher, who since 1972 has taught and worked in the United Kingdom and the United States. Sen has made contributions to welfare economics, social choice theory, economic and social justice, economic theories of famines, decision theory, development economics, public health, and measures of well-being of countries.

Other Resources About Amartya Sen

What Schools Are Affiliated With Amartya Sen?

Amartya Sen is affiliated with the following schools:

What Are Amartya Sen's Academic Contributions?

Amartya Sen has made the following academic contributions: