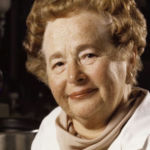 Why Is Gertrude B. Elion Influential?

According to Wikipedia, Gertrude "Trudy" Belle Elion was an American biochemist and pharmacologist, who shared the 1988 Nobel Prize in Physiology or Medicine with George H. Hitchings and Sir James Black for their use of innovative methods of rational drug design for the development of new drugs. This new method focused on understanding the target of the drug rather than simply using trial-and-error. Her work led to the creation of the anti-retroviral drug AZT, which was the first drug widely used against AIDS. Her well known works also include the development of the first immunosuppressive drug, azathioprine, used to fight rejection in organ transplants, and the first successful antiviral drug, acyclovir , used in the treatment of herpes infection.

Other Resources About Gertrude B. Elion

What Schools Are Affiliated With Gertrude B. Elion?

Gertrude B. Elion is affiliated with the following schools: