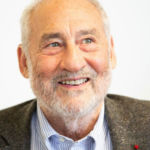 Why Is Joseph Stiglitz Influential?

Joseph Eugene Stiglitz is a Nobel Memorial Prize in Economic Sciences winner, public policy analyst, and professor at Columbia University. He earned his B.A. in Amherst College and his Ph.D in Economics from the Massachusetts Institute of Technology. Stiglitz is another of the most highly esteemed economists in the world, having been awarded a Nobel Prize in 2001, for his work analyzing markets with asymmetric information.

His contributions to the field of economics are immeasurable. In fact, Stiglitz’s CV, with his list of publications, honors, and achievements, is over 100 pages long. He is a former chief economist and senior vice president for the World Bank. He has formerly served as the chair of President Bill Clinton’s Council of Economic Advisors. He founded the Columbia University’s Committee on Global Thought and the Initiative for Policy Dialogue. He is a chair for the University of Manchester’s Brooks World Poverty Institute and a former chairman of the United Nations Commission on Reforms of the International Monetary and Financial System.

There can be no doubt of his impact, given the highly influential roles he has held, shaping economic policy and thought at the federal and international levels. Time magazine named him as one of the top 100 most influential people in the world in 2011.

According to Wikipedia, Joseph Eugene Stiglitz is an American economist and public policy analyst, who is university professor at Columbia University. He is a recipient of the Nobel Memorial Prize in Economic Sciences and the John Bates Clark Medal . He is a former senior vice president and chief economist of the World Bank and is a former member and chairman of the Council of Economic Advisers. He is known for his support of Georgist public finance theory and for his critical view of the management of globalization, of laissez-faire economists , and of international institutions such as the International Monetary Fund and the World Bank.

Other Resources About Joseph Stiglitz

What Schools Are Affiliated With Joseph Stiglitz?

Joseph Stiglitz is affiliated with the following schools:

What Are Joseph Stiglitz's Academic Contributions?

Joseph Stiglitz has made the following academic contributions: