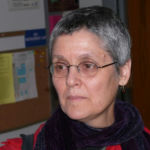 Why Is Judith Roitman Influential?

According to Wikipedia, Judith "Judy" Roitman is a mathematician, a retired professor at the University of Kansas. She specializes in set theory, topology, Boolean algebras, and mathematics education. Biography Roitman was born in 1945 in New York City. She attended Oberlin College, followed by Sarah Lawrence College, graduating in 1966 with a degree in English literature. Next, she became interested in mathematical linguistics. As she had little formal mathematical education, Roitman started taking mathematics classes at the University of California, Berkeley and San Francisco State University. She had enjoyed mathematics as a high school student and found her interest renewed. In 1969 she started graduate studies in mathematics at Berkeley. During graduate school, she spent some time teaching mathematics in elementary schools as a Community Teaching Fellow with Project SEED. Roitman received her Ph.D. in 1974 from UC Berkeley with a thesis in topology; her thesis advisor was Robert M. Solovay. She taught at Wellesley College for three years, then spent a semester at the Institute for Advanced Study. She has been at the University of Kansas since then.

Other Resources About Judith Roitman

What Schools Are Affiliated With Judith Roitman?

Judith Roitman is affiliated with the following schools: