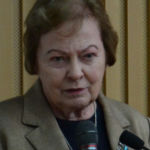 Why Is Nel Noddings Influential?

According to Wikipedia, Nel Noddings is an American feminist, educator, and philosopher best known for her work in philosophy of education, educational theory, and ethics of care. Biography Noddings received a bachelor's degree in mathematics and physical science from Montclair State College in New Jersey, a master's degree in mathematics from Rutgers University, and a Ph.D. in education from the Stanford Graduate School of Education.

Other Resources About Nel Noddings

What Schools Are Affiliated With Nel Noddings?

Nel Noddings is affiliated with the following schools: