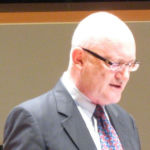 Why Is Nigel Thrift Influential?

Areas of Specialization: Human Geography
Sir Nigel Thrift is the Executive Director of the Schwarzman Scholars and a noted geographer. Thrift studied geography at the University of Wales, Lampeter and earned a Ph.D from the University of Bristol. He has been influential in the fields of geography and economics, and is even credited with inventing the term soft capitalism.

His work has extended beyond geography to the impacts of capitalism and labor markets. He has provided extensive leadership in his field, including as a Pro-Vice-Chancellor for Research at University of Oxford and as Vice Chancellor at University of Warwick. In his position at Warwick, he emerged as a controversial figure in light of draconian cuts to research faculty which coincided rather unfortunately with some significant pay increases for himself. Students at Warwick have fiercely opposed these pay increases and remain opposed to them to this day.

He has been awarded the University of Helsinki Medal, the Newbigin Prize, Victoria Medal of the Royal Geographical Society, and the Scottish Geographical Medal. He was knighted by the Queen 2015.

According to Wikipedia, Sir Nigel John Thrift is a British academic and geographer. In 2018 he was appointed as Chair of the Committee on Radioactive Waste Management, a committee that gives independent scientific and technical advice on radioactive waste to the UK government and the devolved administrations. He is a Visiting Professor at the University of Oxford and Tsinghua University and an Emeritus Professor at the University of Bristol. In 2016 and 2017 he was the executive director of the Schwarzman Scholars, an international leadership program at Tsinghua University in Beijing. He was the Vice-Chancellor of the University of Warwick from 2006 to 2016. He is a leading academic in the fields of human geography and the social sciences.

Other Resources About Nigel Thrift

What Schools Are Affiliated With Nigel Thrift?

Nigel Thrift is affiliated with the following schools: