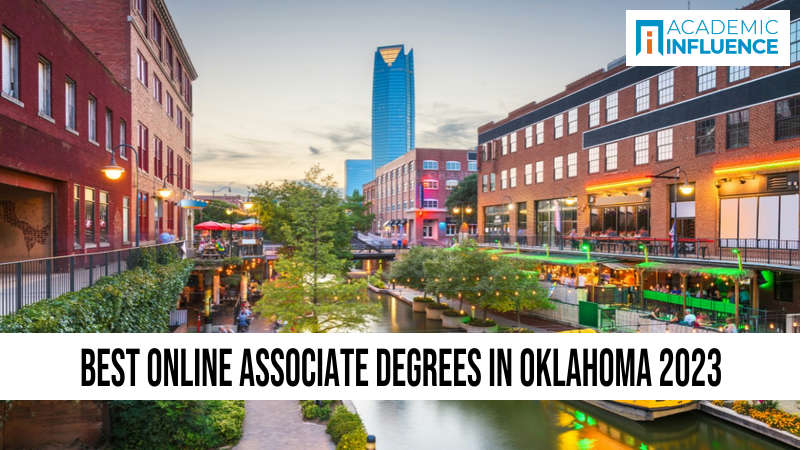 Find the best online associate degrees in Oklahoma ranked by the academic success of faculty and alumni associated with the colleges and universities and their online degree programs.

Colleges and Universities in Oklahoma

Less than half of the schools in Oklahoma are private schools. However, students who attend one these schools can expect a more intimate college experience, as each has a student population smaller than 4,000 students. The largest private school, the University of Tulsa, offers degrees in fields like education, criminal justice, and literature, with tuition fees around $41,000. The public schools tend to be more cost-friendly, with tuition ranging from $4,000 to $9,000 per year.

The University of Oklahoma, the state’s largest public school, costs about $9,000 and serves over 24,000 students. Here, students can partake in competitive on-campus programs in fields like communications and social work, or pursue one of the 30 graduate degrees and certificates online. Oklahoma is also home to several religiously affiliated schools, like Oral Roberts University and Bacone College. Students hoping to pursue a career as a physician, physician’s assistant, or dentist may also want to consider earning their degree here as the state offers several loan forgiveness programs to those who qualify.

The state of Oklahoma is serious about its food - so serious they even declared an official state meal, which consists of fried okra, cornbread, barbecue pork, squash, biscuits, sausage and gravy, grits, corn, strawberries, chicken fried steak, black-eyed peas, and pecan pie. Those hoping to feed both their bellies and their minds can attend one of Oklahoma’s more than 40 colleges and universities.

To learn more about earning your degree in Oklahoma, check out some of the state’s top programs.

What are Oklahoma’s Colleges & Universities?

What is an Associate Degree?

An associate degree is a two-year degree that can be earned at state community colleges, vocational schools, and most accredited colleges and universities.

What will I study with an associate degree?

Why get an associate degree?

Can I get a job with an associate degree?

You can get an entry-level job in your field with an associate degree. Many students will use the associate degree as a way to get relevant job training before entering the job market. In fact, many associates will pursue entry level work in their field while earning a bachelor’s degree through online education.

Should I get an associate degree before pursuing a bachelor’s degree?

Can I get an online degree at the associate level?

You can definitely get an online degree at the associate level. A growing number of online colleges offer high-quality associate-level online courses and complete online programs. Online students will typically take the same courses and curricula as on campus students.

If you need more answers to frequently asked questions about online degrees, we can help.

How do we determine Oklahoma's best online colleges for associate degrees?

Pursuing your degree online doesn’t mean you need to settle for an inferior school. Today, most universities and colleges offer online degrees, and many respected schools are seeing significant growth in their numbers of online students.

The people affiliated with a school are ultimately what make it great. This is why influence — i.e., the academic impact of faculty and alumni associated with a school — gets at the heart of what is truly best in education. The combined influence score of a college or university’s top academic influencers is the best indicator of academic excellence. For our online degree rankings, we focus on the academic influence of faculty and alumni in the specific disciplines we’re ranking.

If you are serious about finding the best online colleges, you should be asking where the most influential professors are teaching, and whether their graduates themselves are advancing the school’s reputation for academic excellence. Most ranking sites rely on an opaque combination of reputation surveys and arbitrary performance metrics. Influence, as measured by our InfluenceRanking engine, provides a ranking that is free from bias, insulated from manipulation, and reflective of real-world educational outcomes.

If this is your first time taking an online course, the experience may require a time of adjustment. Although you’ll typically learn the same material and take the same exams as your on-campus peers, going online will require greater independence and responsibility than going in person. You’ll be accountable for your own time management, for harnessing the online educational technology that you’ll need to use, and for completing the course requirements, such as listening to lectures, learning lessons, reading texts, and handing in assignments. This means you’ll need to create a suitable workspace for yourself, maintain a realistic schedule, and take the initiative in building relationships with your instructors and classmates. With online college, your goal is to find a balance between independence and engagement.

If you take the commute to campus out of the equation, campus-based education is easier. All the support structures available on campus for students, especially with real people to help you in person, are not there online. The demands on you as an online student will largely be the same as for your campus-based counterpart, but without the same helps.

In general, your online courses will present the same material and test you in the same way as traditional in-person courses. In many cases, you’ll even have the same instructors as your on-campus counterparts. In fact, if you are adjusting to the experience of independent learning with remote educational technology for the first time, online college may be considerably more challenging than campus-based college. For a few insights on how to manage this new online experience, check out our 10 Tips for Adjusting to School Online.

Attending a college or university that is not regionally accredited could limit your opportunities. For students seeking an online education, we strongly recommend that they opt for regionally accredited schools. Regional accreditation ensures eligibility for federal loans and grants, ensures your college credits can be transferred between schools, and ensures that your degree credits can be accepted if you wish to earn an advanced degree. For more on this important topic, check out our What is Accreditation and Why Does It Matter? College & University Accreditation Guide.

As long as your online college degree is regionally accredited (see the previous point), you should have little difficulty transferring most of your credits or credentials to another regionally accredited undergraduate school. Every school carries its own standards and procedures for granting a transfer of credits. In many cases, you will encounter some bureaucratic haggling in which some of your credits will be transferred and others may be refused. However, provided that you have attended an online school with recognized regional accreditation, you should be in good shape in transferring your credits earned online.

In most cases, as long you graduate from a well-regarded, regionally-accredited online college, prospective employers won’t look sideways at your degree. In fact, unless you attend an exclusively online college or university, there will likely be no specific indicator on your degree, transcript, or resumé differentiating your school from its brick-and-mortar counterpart. This means that your employer will likely only differentiate between an online and in-person degree if you mention this distinction.

Some employers may express the concern that because you did your degree online, you may need to transition from an online education experience to in-person workplace experience. But in an age of Covid, that concern seems much diminished. The fact is that much employment these days is remote. And collaboration increasingly happens online over Zoom. Many employers will therefore view your online degree as evidence of valuable 21st century professional skills such as independence, self-motivation, time management, and tech savvy.

If you are a student who thrives on the dynamic energy of in-person discussion, who requires the physical surroundings of a classroom to feel engaged, or who considers the social aspects of education to be of equal importance to the actual content of your courses, online education will be less than ideal for you (though depending on your circumstances, it may also be the only viable option).

While there is much in traditional campus-based education that can be substituted or simulated through the online medium, some students may find that there is nothing that can replace the conversation, collaboration, and motivation that occur in an actual in-person classroom setting. As you transition to online education, one of the biggest challenges you will likely face in getting the most out of your online classes is overcoming this difference between “real reality” and “virtual reality.” Fortunately, we’ve got some great Tips for Online Education Beginners.

The advantages of online classes are many. Above all, online courses give you the freedom and flexibility to attend class from anywhere that works for you, whether you’re at home, in a coffee shop, or in a quiet conference room at work. In many cases, you’ll also enjoy the convenience of asynchronous learning opportunities-educational experiences that you can complete at your own pace and on your own schedule. This may include pre-taped lectures, ongoing chat-board discussions, and 24/7 access to digital materials. And of course, just as there are some learners who prefer the energy of a live classroom, there are those who learn best when working in their own personal space, free from distractions. If this sounds like you, you might find the solitude of online learning to be a major advantage.

Whether you’re just getting started on your college search, you’re looking for survival tips on your way to a bachelor’s degree, or you’re preparing for the transition into grad school, we’ve got guides, how to’s and tons of other valuable resources to keep you moving forward in your educational journey.