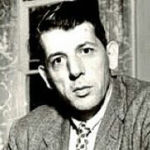 Why Is John Ciardi Influential?

According to Wikipedia, John Anthony Ciardi was an American poet, translator, and etymologist. While primarily known as a poet and translator of Dante's Divine Comedy, he also wrote several volumes of children's poetry, pursued etymology, contributed to the Saturday Review as a columnist and long-time poetry editor, directed the Bread Loaf Writers' Conference in Vermont, and recorded commentaries for National Public Radio.

Other Resources About John Ciardi

What Schools Are Affiliated With John Ciardi?

John Ciardi is affiliated with the following schools: