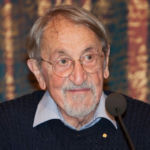 Why Is Martin Karplus Influential?

Karplus is Theodore William Richards Professor of Chemistry, emeritus at Harvard University. He received his Bachelor of Arts (AB) degree from Harvard University in 1950, and his Ph.D. in Chemistry at the California Institute of Technology (Caltech) in 1953, working with the famous Nobel laureate Linus Pauling. Karplus is also currently the Director of the Biophysical Chemistry Laboratory, a joint laboratory between the French National Center for Scientific Research and the University of Strasbourg, France.

Karplus is a theoretical chemist. His interests include fields in physical chemistry, including chemical and quantum chemistry. Importantly, he also works on molecular dynamics simulations of biological macromolecules, an area that uses computation to analyze the movements of atoms and molecules. He is known for the eponymous Karplus equation, which correlates forces at the atomic level.

Karplus is the author of several books, including the much read Atoms and Molecules: An Introduction for Students of Physical Chemistry (with Richard N. Porter). He was elected a member of the National Academy of Sciences in 1967. He received the Linus Pauling Award in 2004. He won no less than the Nobel Prize in Chemistry in 2013.

According to Wikipedia, Martin Karplus is an Austrian and American theoretical chemist. He is the Director of the Biophysical Chemistry Laboratory, a joint laboratory between the French National Center for Scientific Research and the University of Strasbourg, France. He is also the Theodore William Richards Professor of Chemistry, emeritus at Harvard University. Karplus received the 2013 Nobel Prize in Chemistry, together with Michael Levitt and Arieh Warshel, for "the development of multiscale models for complex chemical systems".

Other Resources About Martin Karplus

What Schools Are Affiliated With Martin Karplus?

Martin Karplus is affiliated with the following schools: