Most Affordable Colleges in Pennsylvania 2023 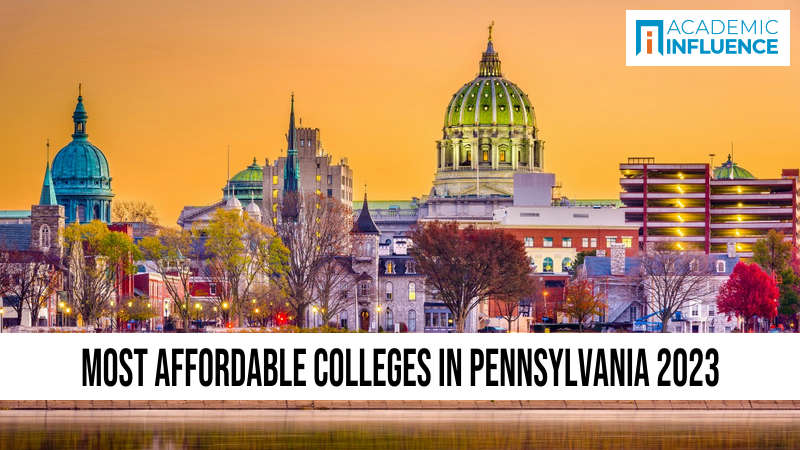 Here are the most affordable colleges and universities in Pennsylvania. Our list will help you find the right kind of school for you, at a price you can afford.

10 Most Affordable Colleges in Pennsylvania 2022

Colleges and Universities in Pennsylvania

Prospective students hoping to earn an associate, bachelor’s, master’s, or doctoral degree have over 100 higher learning institutions to choose from. The largest public university is Pennsylvania State University, or Penn State, with a tuition of $18,000, and a student population of over 95,000 across its campuses. As a private institution, the University of Pennsylvania, or simply Penn, is known for its medical, nursing, social work, and business fields. Tuition is $56,000, and the school boasts a 95% graduation rate.

Students can also attend one of the more than 60 religiously affiliated schools, such as Villanova University or Lafayette College, each with a tuition of about $53,000. Some of the most affordable colleges in the state include the Curtis Institute of Music and the Talmudical Yeshiva of Philadelphia, with tuitions set at $3,000 and $9,000, respectively. Though the average tuition for college in Pennsylvania comes in above the national average, those who practice medicine in underserved areas may qualify for up to $100,000 in loan forgiveness through the Pennsylvania Primary Care Loan Repayment Program.

As the nation’s second state, Pennsylvania’s history runs deep. It’s here where Betsy Ross made the first American flag and where the Declaration of Independence was signed. The Keystone State is also home to some culinary delights, including whoopie pies, soft pretzels, and the famous Philly cheesesteak. Students looking to earn their degree in Pennsylvania will undoubtedly enjoy what the state has to offer.

Check out the state’s top programs and learn more about earning your degree in Pennsylvania.

What are Pennsylvania’s Colleges & Universities?

Pennsylvania and Its Affordable Colleges

Did you know that one of the country’s oldest universities is in Pennsylvania? A private Ivy League school, the University of Pennsylvania, was founded in 1740. But if you’re looking for the state’s most affordable colleges, know first that the average tuition is $63,452 or higher than the $41,568 national average.

College-bound students who want to enjoy the benefits of higher education without crippling student debt can look into colleges and universities in the Pennsylvania’s State System of Higher Education (PASSHE) and the Commonwealth System of Higher Education. Both of these systems not only offer affordable tuition and other fees but also have a wide range of financial aid options.

Founded on July 1, 1983, the Pennsylvania’s State System of Higher Education (PASSHE) is the state agency responsible for overseeing state-owned universities.

As a group, these universities are the largest providers of higher education in Pennsylvania with more than 90,000 students in their degree programs alone. Students and alumni contribute to the socio-economic progress of their local communities, the commonwealth, and the country.

Every member university in the PASSHE is committed to diversity, equity, and inclusivity in higher education. Affordable cost of college education is among the universities’ primary means of enabling students to achieve personal and professional advancement.

The PASSHE is also committed to ideal student to faculty ratio in their member schools, which allows students a higher rate of success in their studies.

The 10 state-owned universities within PASSHE are:

Nearly 80% of students enrolled in PASSHE universities receive financial aid with the typical financial assistance package consisting of scholarships, loans, and work-study employment. The Board of Governors has also voted for a tuition freeze—the fourth in a row—for the 2022-2023 academic year.

While each university has its in-state and out-of-state tuition structure, housing and board packages, and other mandatory fees, the typical undergraduate tuition and other costs for students are:

The unique public-private hybrid university system allows Pennsylvania residents/students to benefit from tuition discounts, thanks to annual financial appropriations from the state. Note, however, that PASSHE universities still have more affordable tuition than universities in the Commonwealth System of Higher Education.

How do we determine Pennsylvania's best affordable colleges and universities?

There are 27 colleges and universities in Pennsylvania with stated tuitions and fees under $20,000/year. The following list of the most affordable colleges and universities in Pennsylvania is composed entirely of schools offering bachelor’s degree programs, have stated tuition and fees near or under the national average of $16,000/year, and are fully accredited colleges.

Most Affordable Colleges in Pennsylvania 2022

These schools are ranked by academic excellence, and all under $20,000/year.

Pennsylvania’s Most Affordable Colleges in Your Area of Interest