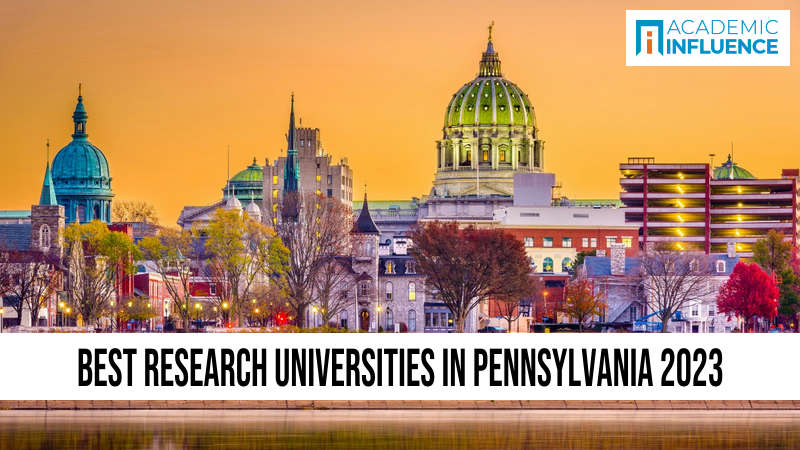 Interested in attending a STEM school in Pennsylvania? Our ranking of top research universities for bachelor’s degrees displays schools that will best prepare you for STEM careers.

Colleges and Universities in Pennsylvania

Prospective students hoping to earn an associate, bachelor’s, master’s, or doctoral degree have over 100 higher learning institutions to choose from. The largest public university is Pennsylvania State University, or Penn State, with a tuition of $18,000, and a student population of over 95,000 across its campuses. As a private institution, the University of Pennsylvania, or simply Penn, is known for its medical, nursing, social work, and business fields. Tuition is $56,000, and the school boasts a 95% graduation rate.

Students can also attend one of the more than 60 religiously affiliated schools, such as Villanova University or Lafayette College, each with a tuition of about $53,000. Some of the most affordable colleges in the state include the Curtis Institute of Music and the Talmudical Yeshiva of Philadelphia, with tuitions set at $3,000 and $9,000, respectively. Though the average tuition for college in Pennsylvania comes in above the national average, those who practice medicine in underserved areas may qualify for up to $100,000 in loan forgiveness through the Pennsylvania Primary Care Loan Repayment Program.

As the nation’s second state, Pennsylvania’s history runs deep. It’s here where Betsy Ross made the first American flag and where the Declaration of Independence was signed. The Keystone State is also home to some culinary delights, including whoopie pies, soft pretzels, and the famous Philly cheesesteak. Students looking to earn their degree in Pennsylvania will undoubtedly enjoy what the state has to offer.

Check out the state’s top programs and learn more about earning your degree in Pennsylvania.

What are Pennsylvania’s Colleges & Universities?

How do we determine Pennsylvania's best colleges and universities?

In pursuing a bachelor’s degree, you will need to choose between three kinds of schools: research universities, liberal arts colleges, and online colleges.

Do you prefer a larger university setting, such as largest public university in your state? Research universities are typically big, offering degrees in many different disciplines. Is a big high-powered research environment the thing for you. If not, you should think about a liberal arts college. In deciding on an undergraduate institution, ask yourself what sort of environment will best help you to be happy and excel.

Often referred to as “teaching colleges” liberal arts colleges put a premium on undergraduate studies and offers a broad range of subjects for students to study. A college of liberal arts typically provides smaller class sizes, more direct engagement with professors, and, most importantly, the opportunity to sample a wide range of subject areas on the way to a bachelor’s degree.

Online colleges are typically the same colleges and universities you could attend in-person, but for certain degree programs the college or unviersity has made the degree programs available to be completed online. For over 5 million students, online degree programs allow students to earn their degrees in the most flexible format available. Online degrees are as respected as the on-campus degress you could earn from the same schools. There’s usually no disctinction between the two degrees, and your degree and transcript will not say that the degree was earned online. Online degree programs are offered by a vast majority of colleges and universities, and the number of offering continues to grow. Whehter you are searching for an associate, bachelor’s, master’s, or doctorate, there’s a good chance you can earn your degree online from a respectable online college.

If you’re interested in an online bachelor’s degree, check out what the best online colleges offer, or search our online degrees for the exact program that interests you. In either case, you will find well respected colleges and universities that offer online degrees.

Check out our directory of research universities throughout the U.S. for a look at the top research institutions in every state.